My Thoughts on Superman Film/TV

This isn’t as organized as I would prefer, I am just testing the written blog waters out right now.

My Thoughts on Superman Film/TV 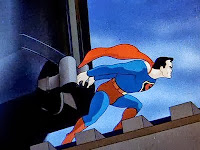 Mild Mannered does not = Nerd!

Clark Kent is this dude that if you ever met him you would not really think twice about him.  He’s one of those dudes that never helps the party but they certainly don’t hurt it.  He’s just there.  Christopher Reeves’ CK was too nerdy for my taste. Brandon Routh wasn’t terrible (he was doing a pre-crisis version of the character).

Also I and II were filmed at the same time.  They stopped production halfway through II due to budget and then when the movie was a hit they started it up again replacing Richard Donner with Rudy Lester.  In order for Lester to get a director credit he needed to film ¾ of the movie so a lot of it was reworked. There is a Donner cut of Superman II that was released a few years ago.  I am curious to see what he did.   I am guessing Reeves either filmed all or some of his Clark parts before they restarted shooting and to remain consistent he just had the character stay that way. Another factoid is that Gene Hackman technically never filmed anything for Superman II, they used look-a-likes and voice doubles and the footage they had from Superman I.

Let’s examine the Bryan Singer Superman Returns movie.  When it comes to that movie I get the impression that Singer wasn’t a Superman comic book fan.  He was a Superman the feature film fan. That reflects in how the movie was made.  Let’s not forget he was doing a loose sequel for I and II.  Even with that who wants to watch Lex Luthor try to pull off the same real estate scam in a different way.  He just traded beach front property on the West Coast in Superman I to creating his own property in the Atlantic Ocean. I would say Singer gets points for the effort but he should have stayed with X-Men.  When he made the switch we got a crappy X-Men 3 movie (maybe I’ll get more detailed in another blog) and a mediocre Superman Returns movie.

My point here is that Singer didn’t reference the comic book material enough.  The best comparison is Chris Nolan’s Batman Begins.  Nolan took Batman and made a story, he than incorporated every bit of the comics book into the story where it made to do so.  He didn't do it just for the sake of doing it. He did it when he needed to mentor for Batman so he used Henri Dukard/Ra’s al Ghul.  He needed a crooked cop so he used Arnold Flass.  All characters in the book.  Nolan had the plot and placed the pieces where needed.  When it came to the character Rachel Dawes (not commenting on casting choice), Nolan created an original character because no one in the comic book mythology really fit the bill.  Singer’s Superman didn’t have that, neither did Richard Donner’s, but at least Donner was ground breaking for finally taking a superhero movie seriously.

I am really Jazzed about this Man of Steel movie being produced by Chris Nolan (The Batman Begins/Dark Knight director).  The director Zach Snyder (300/Watchman director.  He did recently direct this awful movie Sucker Punch, but everyone is allowed a clunker here and there.  Let’s just hope he learns from it). It’s supposed to be a trilogy chronicling Superman’s entire life starting with the explosion of krypton going all the way to Superman losing his powers when the Earth’s sun turns red.

It is even carrying the name Man of Steel which is telling me that they want to base it off the John Byrne version.  Much like how Nolan called his first movie Batman Begins, pretty much saying this is the real beginning of Batman and the Tim Burton/Joel Shumaker versions were not the real story.  He followed it up with the title The Dark Knight.  Both titles infer the comics that heavily influenced how they wrote the story.  Batman Year One and The Dark Knight Returns (my favorite book ever). 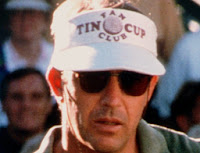 I am nervous about Kevin Costner as Jonathan Kent.  He’s really flaky with his movies.  He might be okay as long as he doesn’t try to do an accent.  Isn’t Diane Lane (Martha Kent) way younger than Kostner too? She is a total hottie though. 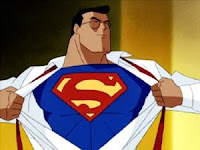 The Best television incarnation of Superman is hands down Bruce Timm’s Superman: The Animated Series.  It was watching the comic in cartoon format.  They didn’t shy away from making changes to the comic book but only did it when it made sense to the story.  They never just did it for the fun of it. The show had it all, Superman as the Boy Scout and Clark Kent as the real person.  He would even call himself Clark in the costume.  Clark Kent was the man putting on the facade of Superman not only to help people but also inspire them.  Superman does what he does to show the world that you can be the most powerful person in the world and use that power for good. 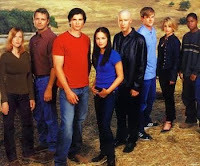 Smallville was a fresh new take when it started with minor annoyances (Lana’s boyfriend Whitney) but it never really improved, in fact as the years went on it looked like the effects budget kept getting cut.  They started cheeping on the action. It was just bad conversation among pretty people.  If I wanted that I’d watch 90210. 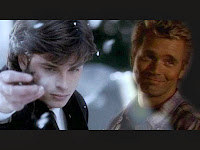 Let’s say the show Jumped the Shark around Season 5 when they killed Jonathan Kent off.  The only reason they did that was because he was killed in the movie.  Jonathan was still alive in the comic at the time.  The animated series didn’t make the mistake of killing the dad, nor did Lois and Clark.  For some reason the show needed to kill Clark’s dad, even though the better acting on the show came from Clark and Jonathan.  They could have killed the mom off; her pep talks weren’t as good as dear old dads.  They should have killed Lana off.  She got way annoying from season 5 on. Who could deal with that constant Dawson, Pacy, Joey romance? We all knew he was going to end up with Lois, why waste our time? Just kill the girl. They really missed a chance for better character development there.  People expect their parents to die, even if it’s early in life however tragic it is (and it is sad), it makes sense.  When people you are in love with die, that devastates you a million times more.  Totally missed 1 of like a million good writing opportunities there Smallville writing team!

The problem really stemmed from it trying to hard to be a prequel to the original movies (Pre-crises DC Comics).  I am sure it’s obvious by now that I am a bigger fan of the John Byrne Man of Steel incarnation of Superman.  Superman is the facade and Clark Kent is the man.  He puts on this ultra good Boy Scout persona to be an example to others.  In reality Clark Kent suffers the same feelings as anyone else.  Smallville spent 10 years showing how Clark becomes Superman and at the end basically stated he’s no longer Clark.  Clark is this nerdy dude and he is only himself when he’s Superman.  Not to mention they pulled in everyone and their grandmother that ever had anything to do with those original movies.  It’s another clear cut case of people who were Superman film fans and not Superman comic fans.

Lois and Clark: The New Adventures of Superman 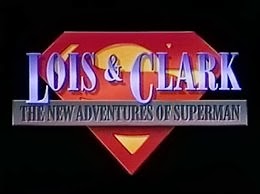 I recently rewatched the first season of Lois and Clark and I am starting to think that show was the best live action version of Clark Kent that I have seen.  My wife really likes the show too.  It’s Clark Kent as the main person, a regular dude.  He becomes the persona of Superman to be an example to others and help people while still living a normal life.  Let’s remember mild mannered does not translate to nerd. 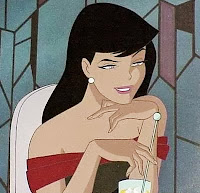 Let’s just end this with a best Lois Lane actress list.
Dana Delany in Superman the Animated Series.
Teri Hatcher from Lois and Clark
Erica Durance in Smallville (Excluding the series finally Air Force One heroes speech.  [I really don’t blame her for that. She did the best with what they gave her writing-wise]).
Kate Bosworth in Superman Returns was at least pleasant to look at.
Margot Kidder in the original Superman Movies is in last place, mostly because of looks.  She was an ugly Lois Lane! (In real life she’d be a fine looking woman, in movie world I cringe).

I never watched the 1950s Superman show.  I can’t comment on that Lois.

Okay I am stopping here because I can go on for a few hours about this!