The Gift of Ghost Cowboy will be screening at Eternal Con 2022 (https://eternalcon.com) on Saturday July 2, 2022 at 3pm. There will be a Q&A with the creators and actors after the screening. Get your tickets for Eternal Con before they sell out and come see our short film. 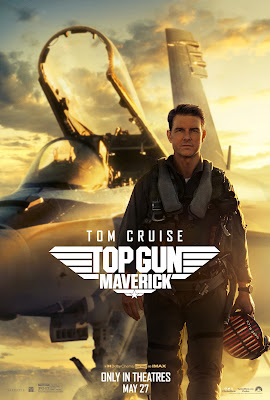 I saw Top Gun: Maverick Friday morning May 27, 2022 and honestly cannot recommend seeing it in theaters.  To put this in context the original film is one of my top five favorite films.  I watched it regularly while growing up and still do to this day.  To me it was basically watching Star Wars space battles in a “real life” setting.  The original Top Gun (1986) didn’t have a deep plot but the pieces did connect.  The characters were well-defined and very very very Hollywood produced story worked.  It is the perfect Hollywood film.  All the plot gimmicks work for the type of film it is.

The sequel is cringe.  An example of how Hollywood always teeters on the edge of ridiculous with any story it creates.  Its basic plot about having to train pilots to blow-up a very specific target in an impossible terrain to prevent the creation of a nuclear stockpile is a nice setup.  We see Maverick (Tom Cruise) being the same character we all love 36 years later.  An amazing fighter pilot who lives up to his call-sign. 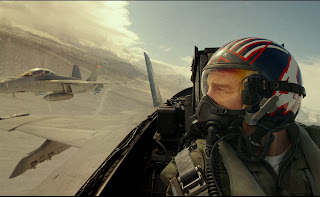 The opening scenes all work, he’s a test pilot, pissing off the top brass, antics ensue, he ejects from his plane (one of five ejections in the film) and lives.   Gets reassigned to train the latest round of Top Gun trophy winners for an impossible mission.  The film wastes its time introducing a series of pilots that do not matter at all to the plot.  The character that really matters is Rooster (Miles Teller), Goose’s son from the original.  Of course there is tension between the two characters that is hinted at.  Then over explained three different times as the plot unfolds.  That’s some poor writing, we only needed to hear the explanation once.  Maverick tried to stop Rooster from becoming a naval aviator as a promise to Goose’s now dead wife (Rooster’s late mother) (Meg Ryan).

We also meet Hangman (Glen Powell) which was probably the most dynamic and underutilized character in the film.  He’s a great pilot who has little regard for the man flying next to him.  Unfortunately his character never really gets to develop into anything of substance because we get distracted with a poorly crafted love story.

Maverick is rekindling his romance with Penny Benjamin (Jennifer Connolly) where a dalliance was alluded to in the original film.  She’s divorced with a teenage daughter and owns a bar.  The romance is stale, the chemistry between Cruise and Connolly is fridged, there isn’t enough time devoted to their relationship or any relationship Maverick has for it to have any real meaning.  If you start doing the math on Maverick’s relationships with Penny it gets creepy.  Jennifer Connolly was born in 1970 which makes her about 16 when Maverick hooks up with her in what were hoping is the year 1986 which makes him the creepy ripe age of 24.  Maybe Connolly is playing someone two or three years older than her actual age…let’s hope so.

Iceman (Val Kilmer), shortened to Ice, just to annoy original fans, is admiral of the Navy and constantly off-screen pulling the ultimate deus ex machina, bailing Maverick out of whatever tight spot he puts himself into.  When we finally get our Iceman cameo, it is so forced, any sentiment it is supposed to have is lost.  While it’s nice to see the callback to the original, and the film does what it can to address Kilmer’s real life medical problems, this nice touch really doesn’t progress the plot of Maverick’s story.  It’s jammed in there for sentiment and spoils any moment it could have held for actual character growth or plot progression. 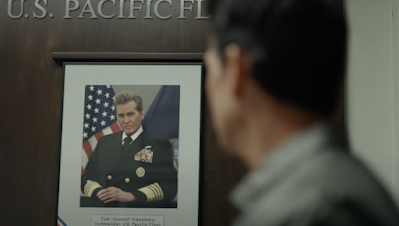 Since Maverick is a Captain he can only answer to Admirals.  Which is absolutely confusing.  Why does the three star Admiral Cyclone (Jon Hamm) have, what’s basically his assistant, two star Admiral Warlock (Charles Parnell)?  Because a Navy admiral is the only military rank that can order around a Navy Captain.  Maverick needs to take orders from both of them.  If Warlock was a commander, captain Maverick wouldn’t have to listen to Warlock impart any wisdom.  That plot point can almost be forgiven because it’s trying to be realistic to Navy ranks.

What’s more baffling is Maverick is the only pilot that can pull off this impossible bombing mission, which he eventually has to prove.  This makes the training scenes completely pointless.  He’s basically the only pilot in existence that can accomplish these impossible maneuvers.  His attempts to teach the next generation is futile.

Additionally, a drone strike at the target would have accomplished the same task without any risk to human life.  I honestly forget if they addressed why drones couldn’t be used but given all the other impossible feats accomplished in this film, there’s no reason a drone couldn’t have worked.

We get to our big combat scene in the film and it's visually stunning.  In a world of CGI films, it's nice to see genuine action shots.  But that pesky plot keeps getting in the way.  We don’t see one but two pilot ejections during the final battle.  The emergency ejection total for this film is five (two pilots bail out during training and are A-OK). It’s like watching an episode of GI Joe when every time a plane was blown up their parachutes opened and they land safely to the ground.  In the real world, pilots having to bail out of planes is typically career ending because the thrust from the ejection seat breaks their collarbones while they are strapped into a seat.  Ejecting from a plane is absolute last resort and only used when the alternative is death.

The films final act involves Maverick and Rooster in enemy territory after ejecting from their blown up planes, perfectly healthy, deciding to steal an enemy plane to fly back to base.  The only plane they can steal is of course an F-14 Tomcat.  I 50% rolled my eyes at this and 50% smiled at the nostalgia.  I’m not really sure how to feel about this story choice.  If you’re fully invested in the film then you love it, if you hate the film, you hate this.  I am still completely on the fence at this point, it hasn’t sold me as good or bad and I’m desperately trying to like it.  Once they successfully steal the plane it’s Maverick with Goose’s son Rooster as his RIO fighting off two modern day fighters.  The dogfight is fairly predictable.  There was a nice twist seeing an enemy pilot who had tricks of his own and could keep up with Maverick and almost sad when the very predictable Han Solo moment occurs with Hangman showing up to take out the last bad guy after Maverick runs our of ammunition.  Then we have our celebration on the aircraft carrier where everyone says some final friendly things to one another and become BFFs.  At the very end Jennifer Connolly shows up and rides off into the sunset with Maverick for no real reason at all except she’s his “love interest” in the film.

So what are we left with?  A two hour eleven minute film with beautifully shot aerial scenes, great action, a poorly hashed out plot.  If the script went through a few more rewrites it might have been a great movie.  It certainly had a long enough runtime that it could have hashed out its love story and characters better.  All the elements were there, they tried to define the characters, spent a little too much time trying to check off their “woke” multi-cultural and gender obligations box (which is pointless if they are only secondary and background characters).  There is potential for an amazing franchise of spin-offs devoted to the other characters in the film.  It’d be nice to see a Top Gun: Hangman or Top Gun: Phoenix spin off films.  If Hollywood decides to make a series of spinoff films focused exclusively on the characters introduced in Top Gun: Maverick there might be a nice franchise to look forward to.  But as for seeing Top Gun: Maverick in the theater, wait for streaming.