The Politics of the Smurfs 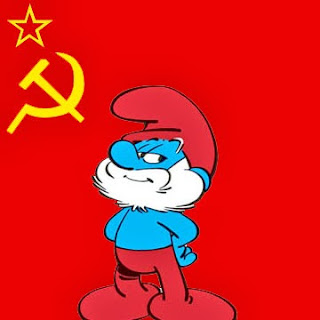 The Smurfs are a working communist society. This is the popular theory that shall be examined.

Let’s start with the Smurf clothing. Papa Smurf has the classic white beard much like the founder of socialism Karl Marx. He’s dressed in red (a popular color associated with communist Russia). All the other Smurfs wear the same colored clothing with the exception of Grandpa Smurf who is dressed in yellow (a popular color associated with communist China) and some children who will be discussed later. The majority have a communist uniform that represses anything other than their government defined identity. Such as Handy Smurf who has a work apron or Brainy Smurf who has stereotypical “Smart Guy” glasses. Smurf’s are not encouraged to go against their assigned positions in life.


Art is allowed but shunned in Smurf society. Jokey Smurf is the resident entertainment in Smurf society and is constantly ridiculed for his antics. Antics he’s required to commit by the societal rules placed on him. Free thinking is shunned by the masses such as the case with Brainy Smurf. His know-it-all ideas are discouraged, only the elder Papa Smurf has any say on the rules of Smurf Society.


Each Smurf has an assigned task in society, Handy is in construction, Reporter spews the words of Papa Smurf (government controlled news), Baker cooks, Lazy gets to sleep all day (probably because he’s the son of a bureaucrat), Tailor works on clothes, etc. They are assigned tasks based on their names. Their names are given to them by Papa Smurf, the head of Smurf Village, the lead government official. It’s a typical communist ideal, “each according to his ability, each according to his need” way of life.

Gargamel is a big bad capitalist that wants to melt the Smurfs down and turn them into gold. This is a direct correlation with how communist would describe the Cold War. A communist believed the United States wanted to launch nuclear weapons against Communist Russia to attain military and economic superiority.

The people that were friendly with the Smurfs were communist sympathizers that want to adopt the Smurf way of life but cannot because of their archaic government structures.


There appears to be no currency in Smurf Village. Everyone works but no one receives any pay. Nor do they ever pay anyone for any goods or services received. Brainy tried in institute an economic structure into the Village and it conveniently caused chaos! It seems that everything is free.

Some of you are wondering about later episodes featuring the children Slouchy, Snappy, Nat, and Sassette Smurf. They do not fit the typical early Smurf archetypes. They have modern clothes, free spirited ideas and other characteristic traits that are not common with the older Smurfs. These Smurfs represent the fall of the Berlin Wall. Notice how they cause all their own problems and constantly got into trouble? The majority of prior Smurf dilemmas were because they were victims of circumstance or got in over their head while trying to help a commie sympathizer. These newer younger Smurfs defy authority. They are showing the audience how the fall of communism will lead to anarchy. The only saving grace for the young Smurfs who disregard the rules are when the wise old community regime of Papa Smurf flies in to save the day and show them the error of their free thinking capitalistic ways.


This commie show is the main reason for whiny Emo freaks! It pumped nothing but communist propaganda into the minds of young children in the hopes they would vote for politicians that shared the ideas that were perpetuated by their commie icon Papa Smurf every Saturday morning. Do not let your children watch this program. It’s our opinion that it can be far more damaging to their psyche than a Quincy marathon.

Written by
Joseph Ammendolea
President/Owner
“I Like To Play With Toys” Productions®
ILikeToPlayWithToysProductions@Yahoo.com