Fight to the Death: USS Enterprise versus Millennium Falcon 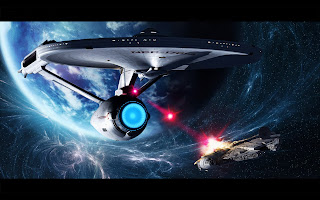 It’s been the question on every nerd’s mind since 1977.  Which ship would win in a fight the Millennium Falcon or the USS Enterprise?  We’ve analyzed the data and made our determination. 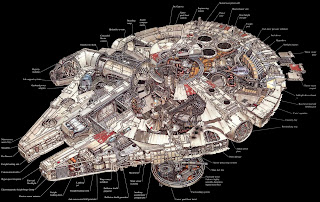 Both ships can attain light speed travel.  The Falcon has a hyper drive system and a high-tech computer that calculates the minimum amount of parsec distances required to travel to a certain destination. It also utilizes a hyperdrive motivator that is easily tampered with and can be hard to isolate as the cause of hyperdrive malfunctions.  Also, the negative power couplings occasionally fuse together and require replacement.  I am uncertain of its power source/fuel. The Falcon is more maneuverable than the Enterprise.

The Enterprise utilizes warp nacelles that create a warp bubble to allow it to travel at faster than light (FTL) speeds.  They are powered by dilithium crystals.  An even number of warp nacelles are required to achieve a warp bubble.  The standard is 2.  There can be 4, but it can never be 3, 5, etc.

The Falcon has enhanced hull-plating. Its fire power consist of 2 bull-turret laser cannons one on the bottom another on top.  There is also a blaster canon adjacent to the cockpit.  In addition to laser canons the Falcon can fire concussion missiles.

The Enterprise has deflective shields, photon torpedoes and phasers.  Since it is harder to maneuver there is an aft torpedo canon it can launch torpedoes from. 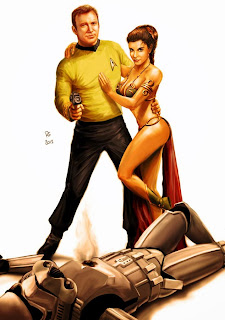 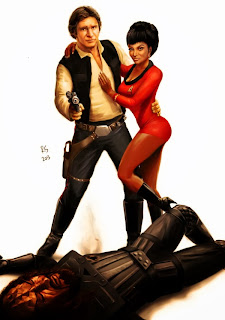 The Falcon can only be controlled from the cockpit. And only requires a crew of two people to run the ship.  If the Falcon is boarded crew members can hide in secret bunkers throughout the ship.

The Enterprise can be controlled from the bridge or engineering which makes it susceptible to onboard takeovers.  It requires a crew of 428 people to run at peak capacity.  In a pinch the entire system can run though one terminal and thus run with a crew of 4 but only if Scotty is the engineer and also it has limited operational abilities being powered through one terminal.  The Enterprise can function without the bridge but not engineering; therefore the bridge is fairly useless for controlling the ship and is more of an information hub.  All the real functions (accept for attacks) are done in engineering. If you capture engineering you can cripple the Enterprise. The Enterprise has a self-destruct sequence as a defense against hostile takeovers happening aboard the ship.

The Enterprise is a larger ship and also has a tractor beam.  The Falcon is smaller and susceptible to tractor beams.

Previously owned by Lando Calrissian, the Millennium Flacon’s most famous commander is Han Solo and his first-mate is Chewbacca a Wookie. Han Solo successfully navigated an asteroid field, defying the approximated 3,720 to 1 odds.  Along with being an exceptional pilot he’s known as a quick thinker and natural leader.  A quick thinker Han Solo successfully hid from pursuing Imperial Forces by clamping the Falcon onto one of the Star Destroyers and powering down to avoid detection.  Solo was promoted to General during the Battle of Endor and successfully commanded the ground forces while destroying the Death Star deflector shield generator.

The USS Enterprise NCC 1701 experienced several different captain and crew personnel.  Christopher Pike, James T Kirk, William Decker, & Spock.  The most famous starship captain was James T Kirk along with his first officer Spock a half Human half Vulcan and also head Science Officer. Kirk is a highly intelligent and the only person to ever beat the Kobayashi Maru earning a commendation for original thinking for tackling the training simulation which was intended to teach Starfleet Cadets the meaning of the no win scenario.  Kirk is an adamant adventure seeker and the youngest person to ever Captain his own ship in the United Federation of Planets.  He developed the Corbomite Maneuver which was a bluff that caused a hostile enemy spaceship to stand down while attacking the Enterprise.  Kirk also had gone to great lengths to protect the Enterprise, even as far to initiate the self-destruct sequence when face with a band of attacking Klingons.  Kirk was the youngest person ever promoted to admiral in Starfleet.

And the winner is... 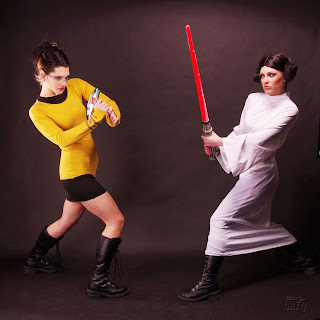 The Enterprise is the more powerful ship and would probably destroy the Falcon in a firefight.  But, if there is an experienced and resourceful enough crew on the Falcon stands a chance of winning. While both captains have defied odds in unwinnable situations, Kirk’s numerous adventures outweigh Solo’s.  Kirk has more fire power, advanced technology, expertise, and larger crew which allows for a victory over Solo’s smaller vessel.  Barring a fatal error in judgment on Kirk’s part the Enterprise would be the victor against the Millennium Falcon.