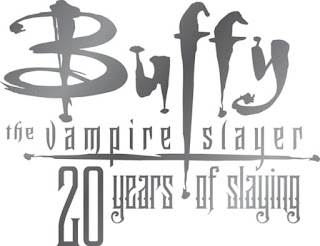 In honor of Buffy the Vampire Slayer’s 20th Anniversary I’d like to share this little story about how I discovered the two best TV series of all time; Buffy the Vampire Slayer and it’s spinoff Angel.  When I first heard the WB was broadcasting a Buffy show I was 13 and thought it was the dumbest idea ever.  “Why are they making a TV show 5 years after that terrible movie?”

I completely avoided the show at all cost.  My mom tried forcing the entire family to watch the season 2 episode “Halloween” because she read about it in TV Guide.  I watched about 5 seconds of the episode where a vampire was taping Buffy fight.  I left opting to watch repeats of Caroline in the City and Frasier in my bedroom instead.  Afterword, she then stated I would have liked the show, I filed it in the lame mother drawer and went another 3 seasons with my only sci-fi being the X-Files and Star Trek.

Then I saw ads for Angel, and was like “Ugg a spinoff of that lame Buffy show!” I still refused to watch.  Things changed in the summer of 2000, it was after Season 4 of Buffy and Season 1 of Angel, there is nothing on TV and I settled on an episode of Angel.  It was the episode “Room With A View” featuring the first appearance of Phantom Dennis, it was an okay episode to start with.  I was completely lost on all the characters and history but the dude who played Mark from Rosanne (Glenn Quinn) was on the show so it wasn’t all bad.  I didn’t immediately watch more episodes but I wasn’t a hater of Angel anymore.

Then the premiere of Buffy season 5 comes around and it’s with Dracula.  My mother tells me about it and says I should check it out, so I concede.  I am again super lost as to who all the characters are and all the back-story but the episode was funny enough.  I still didn’t start watching regularly though.  I was just a no longer a hater.

By this point I am 17 and have pretty much avoided Buffy and Angel all through high school.  I get a part time job and my only free night off is Tuesday.  There is nothing worth watching on any other channel and I need something to play in the background while writing my English term paper.  I settle on Buffy & Angel which aired back to back in 2000/2001.  So I am trying to write this term paper while casually watching the show in the background.  I’m enjoying Angel more because there is less history to catch-up on.  I eventually start digging Buffy after the Episode “Family.” Tara’s family comes to take her away and it builds up to the gang talking about how much they care for Tara until Spike interjects how he doesn’t care what happens.   That was the line where I was like woah, this show’s funny and dramatic.

I walked into the show unaware Dawn had existed in prior seasons.  I thought she was always a character.  I didn’t understand Spike’s chip. All the relationships were lost to me.  The other issue was season 4 repeats were played in between new episodes, so I was having problems following the continuity of the season.  I would mention the episode where Seth Green returned and my buddy at school was like "that's a repeat."  I’d see Adam floating around causing shenanigans and then Glory.  But eventually Tara gets her memory wiped in “Tough Love” and I am hooked for the rest of the series.

So at first run I am digging Angel way more because the characters are a bit newer and the history is less extensive.  I get to witness the friendship of Gunn and Wesley evolve (and eventually deteriorate), I get a ton of back story on Angel’s life.  The callbacks to prior stories resonate much more on Angel than Buffy.  Though all the Cordelia Angelus references were over my head.  Later in a random syndication viewing, I stumbled across a Buffy season 3 episode and didn’t even recognize Wesley’s character.  He was vastly different than Season 2 Angel and beyond.
So I was regularly watching all of Seasons 6 and 7 of Buffy and Seasons 3 - 5 of Angel and trying to catch up by watching repeats of older seasons but they were hard to find and out of sequence.  It didn’t matter though, the show was that good.  Watching the show in this sequence had many drawbacks.  I never appreciated Spike and what he brought to the show, I missed all the great Cordelia moments.  Any episode I saw, I knew certain good guys and bad guys weren’t going to die or the basic gist on how things go down.

So after the shows concluded the DVD market was booming and I proceeded to buy every season and watch both series from beginning to end.  Knowing what happened to Oz, Angel/Angelus, the Mayor, Amy, Faith, Spike, Doyle lost shock value but the stories stood up regardless of all the spoilers.

Discovering we never saw tuckers brother in the show was a surprise, and also realizing Dawn wasn’t in the first 4 seasons was an adjustment.  They threw her in there so seamlessly.  Getting to know Buffy’s mom and genuinely feeling bad when I rewatched “The Body” was worth it.  Having the entire story when finally picking between Angel and Spike made things much easier.

I would absolutely tell everyone not to watch Buffy the Vampire Slayer and Angel the way I did.  But the show was so well crafted and so well written that jumping in mid run didn’t matter. Also skipping Angel season 1 probably helped me appreciate that show more. 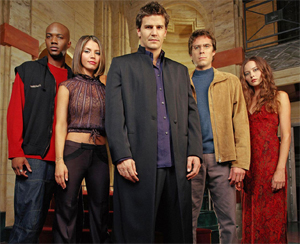 The lesson to be learned from this is don’t be against watching any TV show, at least give it a few episodes before deciding.  I almost missed out on the greatest TV universe in all of history.  Which would have meant my favorite sci-fi shows would have been Sliders and Smallville because my standards of writing would have been set very low.  But now I compare all shows to Buffy and Angel and everything fails in comparison making me the angriest nerd in existence.