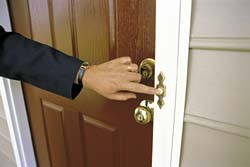 It was a typical Friday night Mike, Matt and I were all chilling in front of Matt’s house.  Joe H (Herbs), Greg and Anthony were at Mike’s ex-girlfriend Kristen’s house.  Herbs and Greg went to school with Kristen and were friendly with her.  Herbs use to date Bernadette for like a day or a week or a month or something.  But at that point in time Bernadette and Anthony had a little puppy love thing happening.
The Greg, Kristen, Mike triangle was more pathetic.  Greg dated Kristen for a week and a half.  Kristen dumped Greg, on his birthday, for Mike (ouchness).  I think that created a little tension amongst everyone.  What also didn’t help was Bernadette crushing Greg’s balls while he was lying on the floor and unabashedly joking to Bernadette “Come on baby I know you want it.  Your sister just passed up on this great deal.  Why don’t you take a whirl?” Greg decided to take that ball crushing anger project it all onto Kristen with clever one liners.  After Kristen and Mike broke up, Greg was known to say such phrases like “what’s up Kristen lover?” whenever he saw Mike.
Mike and Kristen dated for a year and a half.  I wasn’t really around much for that.  I don’t think I wanted to be, the stories I heard were even too sexual for me (i.e. bumper pool table).
So Greg, Herbs, Anthony, Kristen, and Bernadette were all just chilling out having some fun together that night.  Kristen’s mom was out for the evening.  Greg, Herbs, and Anthony leave Kristen’s and come over to Matt’s.  We’re all chilling out doing the usual teenage antics, when Matt’s mother starts complaining that we’re being to loud and makes him go inside.
It's a beautifully dark evening and we are left stranded with nothing to do.  Greg gets the great idea, since Kristen and Bernadette are home alone, let’s ring and run Kristen’s house.  Despite the awesomely smooth ride, the five of us can’t fit in Greg’s accord.  We all pile into Mike’s Silverado “Love Wagon” and head over to her house.  Her house was the fifth one from the corner and had a sedan parked in the driveway. Mike parks on the adjoining avenue behind some bushes.

We get out of the truck and plan out our attack.  Herbs and I would bang on the front window, Mike would knock on the front door, and Greg would ring the bell.  Anthony just sat in the car, he didn’t want anything to do with this because he was sweet on Bernadette.
We start to sneak up, giggling like little girls all the way.  We get to the house and “BANG! BANG! BANG! BANG!”  We fly around the corner to Mike’s car and speed off.
“What happened?” Anthony says.
Greg answers, “We banged on the windows and crap.”
“Do you think they heard it?” Mike asks
Herbs replies “I don’t know.  Lets go back and do it again and this time we’ll hide behind the bushes and watch them come out.”
We go back to the spot we were at and do the same thing except this time we hide behind the bushes.  As we’re spying on the house we seem the two girls peek outside like a groundhog on Groundhog Day. They look around but cannot do not find anything.  We do it again.  The same thing happens.  We start to become more brazen in our endeavor and decide to change the position we’re hiding in.  We stay put and wait for Mike to move the car across the intersection and park.
We approach; ready to do what is now the usual routine, but Kristen and Bernadette are ready for us this time.  We get to the house do our banging.  Kristen and Bernadette storm out of the door.  We jet as fast as we can.  Mike, Greg, and Herbs all head to the car.  I figure since we are being followed it would be a good idea to split up.  It’s probably a good idea to share those plans with others in those moments. I run straight down the block past the car.
I get about halfway down the block and realize I’m not being followed.  I turn around and see Mike’s truck speeding off.  “Those bastards left without me.” I say to myself.  I find out later they thought I started to run home.  At this point I figure I’m going to have to walk back home.  I start heading back the way I came.
As I’m walking I see in the distance, the Love Wagon go by again.  A few seconds later I see a purple Saturn go by.  The lights were off and it looked a little like the car that was in Kristen’s driveway.  I get to the end of the block and turn the corner.  Mike’s truck pulls up and everyone except Anthony runs out.  Greg yells out to me
“Joe hide!  It’s Kristen she is following us.”
Herbs and Greg run ahead of me and make a right and run up the adjacent block.  Mike runs up the way I came.  I panic, and hide under the truck.  Kristen pulls up gets out of the car and looks though the windows of Mike’s truck.  Luckily for Anthony the truck was illegally tinted.  Luckily for me she didn’t look under the car.  She then gets back in her car drives up the block Mike ran up.  I get out from under the car Anthony gets out from inside the car and we simultaneously say “Holy shit!” and start laughing.
“Where did they do?” I ask
“I don’t know”
“I’m going to go look for them. I’ll be back.”
I cross the street and Kristen drives by the car again.  I had nowhere to hide. Anthony is already in the Love Wagon.  So I put my head down and hope she doesn’t recognize me.   It works she slows down for I second I keep walking like nothing was happening.  Out of the corner of my eye I see her give me a look of confusion.  She recognizes me but not enough to be like “that’s one of them!”
She drives up the block Greg and Herbs ran up, gets about half way up the block and they’re on the way back to the Love Wagon.  She pulls up next to them, Greg jumps in some bushes and yells “Joe, get down.”  Herbs has no clue what is going on.  He’s standing out there in all his moronic glory.
Kristen roles down the window and starts yelling at them saying, “It’s over! It’s over!”
“No it’s not. Joe Run!”
They speed off, running down the block back to Mike’s car.  Kristen couldn’t catch them because she had to make a U turn.  Herbs and Greg get to the truck Anthony and I am waiting there.
“Where’s Mike?” Greg says.
I answer, “We don’t know. Wasn’t he with you?”
Herbs replies, “No he went the other way.”
“Oh shit! What are we going to do?” (He was the ride after all).
At that exact moment Mike comes running around the block.  “Yo guys Kristen drove right past me while I was hiding behind a car.”
I reply, “That’s great.  Let’s get the hell out of here.” We all get in the truck and drive off.


Written by
Joseph Ammendolea
ILikeToPlayWithToysProductions@yahoo.com
Posted by “I Like To Play With Toys” Productions®. at 12:48 AM