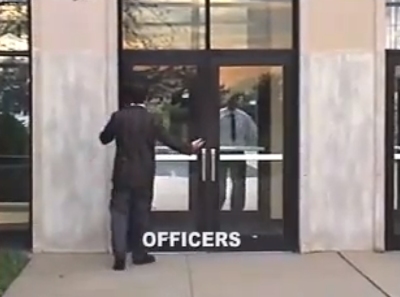 Officers was an incomplete project that was conceived in the mid 1990s by David Rerecich and Bill Wikstrom.  It was a follow-up to Battles, Homophobia, and Kristmas, all stories that took place in their established Bellerose/Floral Park universe.  The early concept revolved around a typical day in the lives of Detective Bellerose and Captain Floral Park.  It was to include classic cop clichés such as donut jokes and dry cop banter.  Dave and Bill created and starred as two iconic police characters.  Bill played the dry talking, rough and tumble, Detective Bellerose. Dave was the quirky Captain Floral Park.  They filmed minor scenes but abandoned the project due to lack of focus in the script.

It was late 2003, Bill and Joseph were at Dave’s apartment watching old videos Dave and Bill created back in the mid-nineties.  Joseph was trying to come up with a concept that would cater to Matthew Swiatocha wanting to create a musical score to a movie.  As luck would have it outtakes from an abandoned Officers movie began playing.  Joseph inquired about the footage and what happened to the movie.  After hearing the story he proposed to complete the script for them.  He jotted down some quick notes and ran through some story ideas with them.  They dismissively agreed to his plot ideas not thinking he would actually write a script.  A few months later Joseph completed his script and sent it to Dave for review.  Dave shocked that Joseph was serious about finishing an Officers movie read through the script doing his best to tear it apart by making fun of all the static dialogue.  When Joseph received the revised version he thought it was brilliant, it was the comedic touch that his draft was missing.  The script was then sent to Bill who made additional alterations and afterwards the three collaborated together on one final draft before setting forth on production.


Joseph wrote the plot in a simple format that was filmable but also called upon a plethora of characters.  Understanding he could not amass such a large cast all at once he modeled the story around a film noir mystery that would lead the main characters to different quirky people before solving the case.  The two main characters were David Rerecich returning to his role as Captain Floral Park and Bill Wikstrom playing the iconic Detective Bellerose .

Bill Wikstrom was a typical Bellerose underachiever, a quick witted boy with a talent for the arts but never quite got his due in life.  His claim to fame was a stint as the lead singer of the band Endangered Feces.  He was also the lead singer and guitarist for the lesser known rock band Idiot Squad.  While Bill’s main distinction was in music he was also behind the creation of Detective Bellerose and would regularly collaborate with Dave on all his video ideas.

With the script completed production began but it was riddled with delays and three scenes required reshoots.  The majority of the issues were scheduling conflicts and also a lack of a crew.  Joseph was directing and doing the cinematography at the same time.  He was accustomed to the double tasks while directing music videos but it allowed him to talk over the camera and give needed stage directions.  While filming a talkie it significantly limited his directing abilities during the shoot.  The length of the script was also difficult for the amateur actors to memorize which required close-ups for a majority of the takes so they could read the script while performing their dialogue.  The visual look of Officers became rather static with stiff acting while on a time crunch.

The burden of comedy rested on the main characters who kept trying to add lib with mixed results while Joseph was trying to complete a page count during each scheduled shoot.  Tension rose on the set when Dave and Joseph disagreed with how some of the performances should be portrayed during the shooting.  Dave requested to edit the film to his preference of a 1970s style cop show and was performing the role accordingly.  Joseph had a grander noir spoof in mind which caused conflicts during certain takes.  Bill, who was left with the burden of carrying the film was handed much of the dry dialogue while doing his best to jazz it up with a variety of vocal inflections.  Officers took more than a year to shoot but was finally completed in 2005.

Two known cuts of the movie exist.  Dave’s version respectively known as Officers: The Adventures of Detective Bellerose and Captain Floral Park (the editors cut) is modeled after a classic 1970s cop show complete with 1970s style music, vintage commercials and a runtime of thirty minutes.  Joseph’s cut known simply as Officers is compiled of mostly videogame and some pop music.  The music track used for the film was supposed to be an ample track that would be replaced by a score created by Matthew Swiatocha.  Unfortunately Matthew dropped out of the project which left Joseph with an incomplete score. The runtime was going on about 45 minutes when Joseph was discussing his venture with his coworker Eileen at The Late Show with David Letterman.  She advised him to cut the work down to thirty minutes, Joseph decided to extend the piece to a full hour.  He added two different segments into the movie that consisted of Detective Bellerose and another character looking at one another with no actual conversation happening.  He also added a drawn out opening scene with clips that included miscellaneous takes and items off the cutting room floor.  These segments are what most people reference as their turnoff to Joseph’s cut of the movie.  Dave’s movie premiered  Christmas 2005 to a select circle of Dave’s friends and garnered positive feedback.  Joseph’s movie had no such premier and was not available for a mass audience to see until it was posted on YouTube years later.


The reception of the two movie versions remain mixed.  Many appreciate Dave’s shorter running time but find his addition of commercials burdensome in rewatches.  With the exception of the staring scenes and long intro, Joseph received better praise for how he cut the scenes together.  Dave’s vanity prevented him from using certain takes in his version that involved him performing funnier antics.  Joseph had no such apprehension when cutting together Dave’s performance and thus demonstrated the actors in more powerful presentations.   With all of that many find it hard to justify a one hour amateur movie.  When comparing both versions of the movie to YouTube views, Joseph’s cut has a significantly higher count which makes his the winner on a commercial level but perhaps not at a critical level.

While My Guitar Gently Weeps

Coming off what Joseph perceived as the failure of Officers he decided to go back to his roots with a music video.  He wanted to up the ante and chose to adapt a popular story.  He selected the Twilight Zone episode A Passage for Trumpet about a drunk musician who has a near death experience and rediscovers his love of music.  Joseph included some dialogue at the beginning to add some additional context to the video.  He also decided to disregard his rule to use black and white in a video, the cardinal sin of the amateur filmmaker.  The story begins in color and after the character is hit by the car it shifts to black and white to show he’s been transported into another realm and also pay homage to its Twilight Zone origins.


Joseph casted “I Like To Play With Toys” Productions® regulars Mike Cody, David Rerecich, Angelica McKessy and himself in the video.  The video also marked the first time Joseph created a shot list to work off of.  The choice to use actors accustomed to Joseph’s prior works coupled with a written script helped the shooting be one of the most efficient directorial jobs by Joseph.  Even the camera movements, though not as elaborately planned, were heavily influenced by Matthew Swiatocha.

When Joseph premiered the video it was met with outstandingly positive feedback.  Many praised it as “I Like To Play With Toys” Productions® best work ever.  Dave exclaimed it was how Officers should have been made.  The video even went semi-viral on YouTube with a current count of almost 300,000 views.